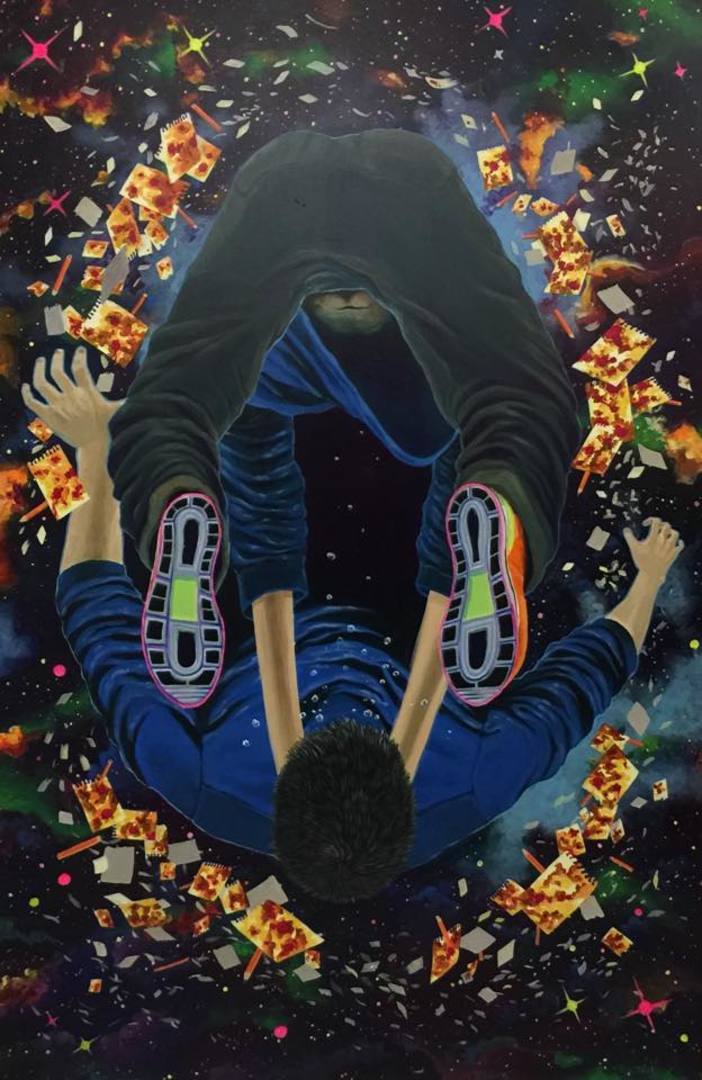 matchbaco is very pleased to announce “The Earth-Crawling Tongues”, an exhibition of works by Takayuki Nomura, to be held from 26th December,2014 to 24th January 2015. Open: 14:00 - 21:00. Closed on Mondays. Open until midnight on Fridays & Saturdays.

Crafted with vivid color and detail, Takayuki Nomura’s paintings are filled with energy and anger. They are a tortured reflection on the uncaring nature of modern “disguised” society and the hidden agony of a “disposable” generation. This exhibition, “The Earth-Crawling Tongues”, is a bitter satire on a society which hides the suffering, humiliation and conflict faced by workers behind a veil of politeness and artifice.

Haven’t you experienced being struck down by overwhelming injustice? We are all raised to believe in reason and justice, yet unfortunately, these things are of little use in our society. Our society is a rotten and foolish one in which base cunning is seen as intelligence while evil is seen as strength. If this judgment stirs you to denial, this is merely because you still believe the fantasies of reason and justice you’ve been taught.

Instead of such emotional arguments, open your eyes - those simple organs - rather than your heart, and view the truth of this society. Turning our eyes from inconvenient reality, calling insincere behavior “flexibility” or keeping quiet even when we have a will to speak; the more we learn to do these things, the more we are praised for being “adult”.

We are brainwashed to believe that becoming “adult” is right and good. The wicked elites who hold society’s power prefer such “adult”, because those who abandoned real thought are easily used. For their own pleasure and profit, such elites enjoy a boardgame where “adult” are mere pieces to be played. Pieces that are thus used end up destroyed in both mind and body, but this does not concern the elites players; there is plenty of fresh stock. the evil cycle continues to be well-oiled.

The pieces which have dropped off the board, those soft-hearted people who have fallen and can go on further; they are berated as losers by those elites and their society.

For you who cannot stand, who crawls on the earth, no place at the table is granted no food prepared; such stability is given only to pieces in the game. Don’t you cry with humiliation, eating the grit-covered fruit that has fallen to the earth? But please, don’t forget; that you feel humiliation is because you are noble. That you fall and yet crawl forward is because you are strong. In order to survive, you eat the grit-covered fruit; that the sincerity of your spirit might one day become power.

Even in humiliation, one can live; until the day when the evil cycle is broken and those who wield authority without consideration for others are torn down.

Right now, we are the tongues that crawl the earth.

Born 1987, in Yamaguchi. Lives and works in Tokyo.