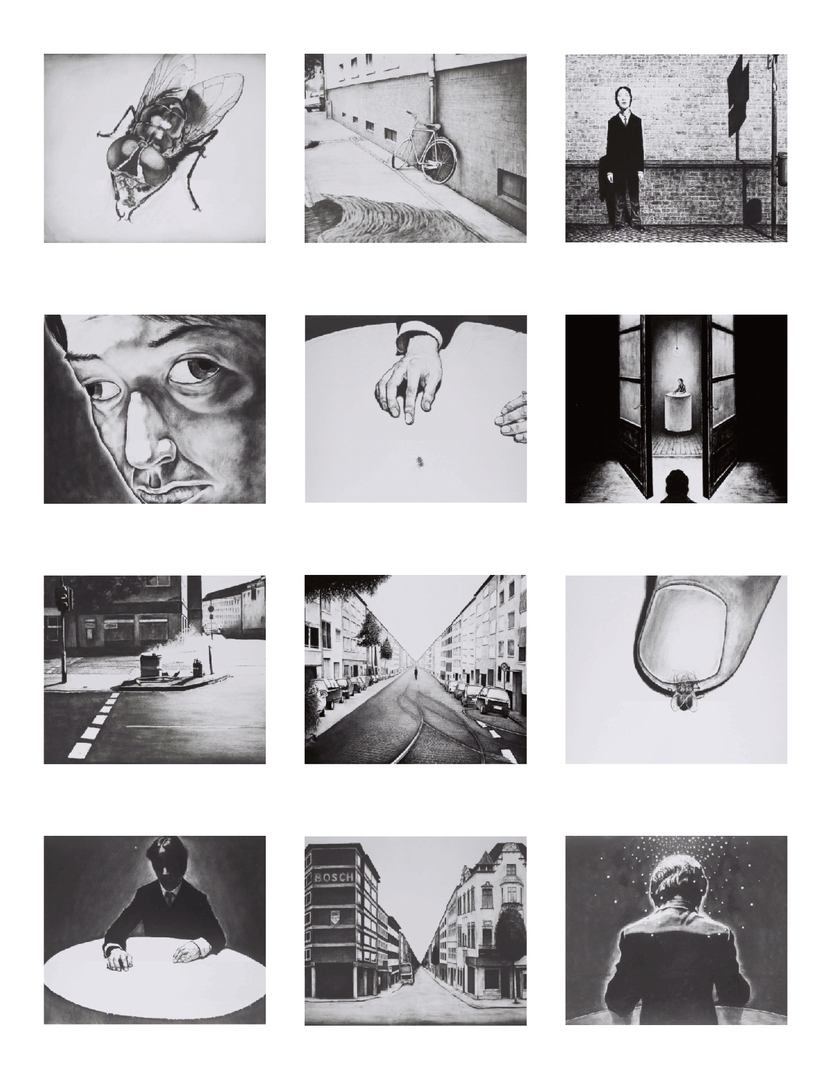 KEN NAKAHASHI is pleased to present I touch Dream, a solo exhibition in tribute to Masaharu Sato who passed away on March 9 this year, to be held from July 12 (Fri) until July 27 (Sat), 2019.

Exhibited for the first time, this show comprises Sato’s first video work titled I touch Dream #1 (single channel monochrome, 3 minutes 34 seconds). Made in 1999, it was the year Sato moved to Germany after having received an M.F.A. at Tokyo University of the Arts.

Day by day, Sato saw nightmares while he spent his lonely life in Germany. He sketched fragmentary images of these nightmares with charcoal, photographed them one by one (one cut at a time), and put them together into a video. Since a dream itself is unstable and fragmentary, Sato visualized these ambiguous dreams by simply connecting one image to another, instead of aggregating the fragments of a dream into one painting. This served as a starting point for Sato’s works in animations. By sliding into reality the frames of relentlessly traced fragments of dreams and repeated sketches, Sato tried to surface the ‘touch’ that lurks in between the two worlds: the world where we exist, and the world of the dreams we see. This work led to the establishment of a style using rotoscope techniques, such as his representative works Datemaki, Calling, and Tokyo Trace.

Masaharu Sato was born 1973 in Oita. He obtained an M.F.A. in painting at Tokyo University of the Arts in 1999. Later studied in Germany at Kunstakademie Düsseldorf and lived 10 years, and returned to Japan in 2010. He is best known for his video art that utilizes the rotoscope technique, in which he uses a pentool to trace images taken by a video camera, to animate them. Shown by the motifs in the reanimated video footage are ‘real and slightly bizarre moments,’ that bring a notion of reality and unreality interlacing.

He has shown numerous exhibitions in several capital cities. In 2009, he received special prize at the 12th Taro Okamoto Award for Contemporary Art, and in 2011 was selected for Jury Selection of the 15th JAPAN MEDIA ARTS FESTIVAL. The solo exhibition Hara Documents 10 Masaharu Sato: Tokyo Trace at Hara Museum of Contemporary Art in 2016 attracted wide attention.

In the beginning of 2019, he had shown his works concurrently at three locations, Roppongi Crossing 2019: Connexions at Mori Museum, ACT Vol.1 First Lingering Mist of Spring at Tokyo Arts and Space (TOKAS), and Dr. Reaper at KEN NAKAHASHI.

Since September 2018, when he was sentenced three months left for cancer which he fought for over 8 years, his visual acuity had reduced due to the progress of his medical condition. However, even amongst these difficulties that prevented him from making his video works, he energetically kept working on the acrylic paintings for his solo exhibition at KEN NAKAHASHI. During the above 3 exhibitions, at 10:56 am on March 9, he departed peacefully at the age of 45, under the warm company of his family.