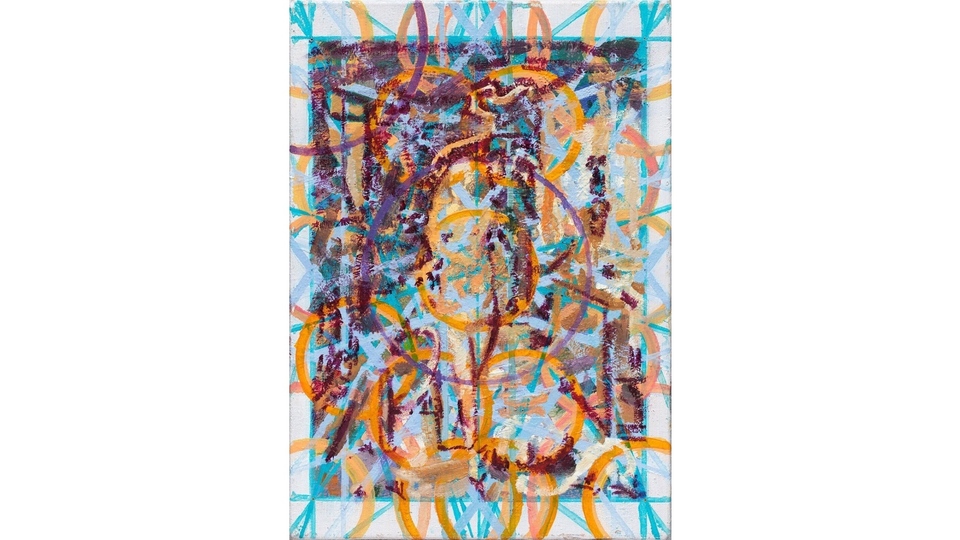 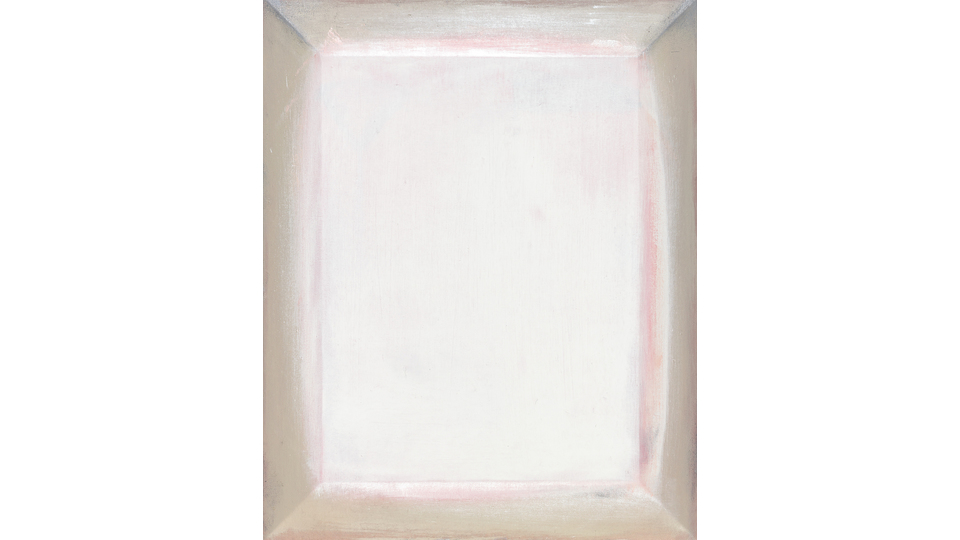 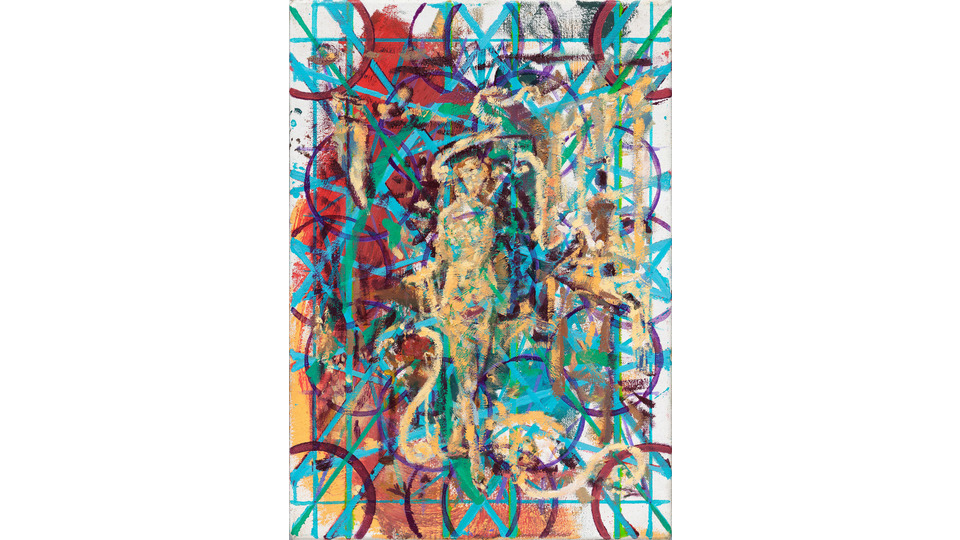 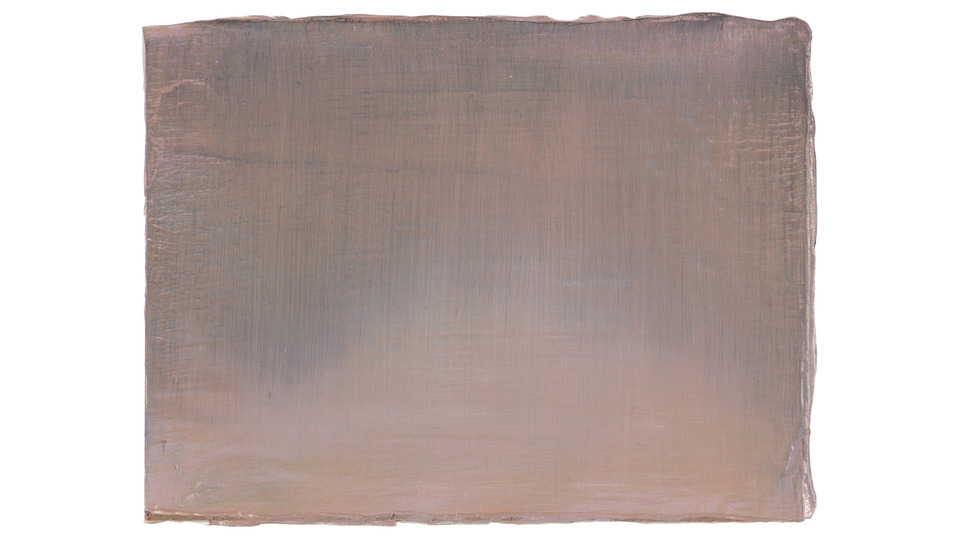 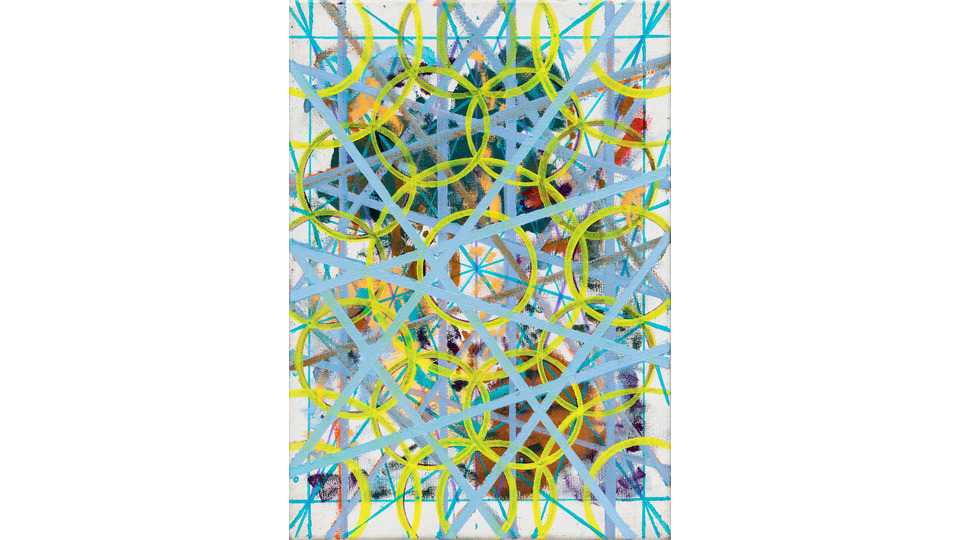 KEN NAKAHASHI is pleased to announce “TSUKI 月”, a duo exhibition by 2 artist from Leipzig, Germany, Jochen Plogsties and Erik Swars, to be held from November 17 (Fri) until December 23 (Sat), 2017.

In the branching structure of painting expression -the imitation of the reality or the visualization of the spiritual realm-, Plogsties and Swars analyze the form of composition used for a painting, its visual image existing as a concept itself, and its appearance; not merely copying the originals but by using reproductions as their image source, such as printed catalogs of old masterpieces.

The imitation of the reality, imparting the figuration: colorful topological lines with continuous pentagons that show way for the artist where to place the figures on the canvas, or the division points and grids that lead to the golden ratio arise independently on the canvas.

Intersections of geometric lines that form the principal view of composition overlaps with the figures placed, visualizing the area in which the artist's preconception is avoided.

Jochen Plogsties bases his paintings on reproductions of well-known art works, from Leonard da Vinci’s “Mona Lisa” to Picasso’s “The Seated Harlequin”, the iconic Beatles photograph at Abby Road, to Cindy Sherman’s photographs. Instead of the original work, he uses reproductions of those he find on postcards, books, and on the internet.

He studied at the Academy of Visual Arts Leipzig, was a masters student of Neo Rauch. In 2011, Jochen Plogsties was awarded the Kunstpreis der Leipzig Volkszeitung. Prior winners include Neo Rauch, Matthias Weischer.

His works has been shown in group exhibition “New Acquisitions” (Hildebrand Collection, Leipzig) in 2017, solo exhibition “Shanzhai” (ASPN Gallery, Leipzig) in 2016, solo exhibition at Kestner-Gesellschaft, Hannover in 2014, at Museum der bildenden Kuenste Leipzig in 2011, and numerous other exhibitions. His works are included in major collections such as Museum der bildenden Kuenste Leipzig, Kunstfonds of the Staatliche Kunstsammlungen Dresden, Zabludowicz Collection in London, SØR Rusche Collection in Berlin, Leipziger Volkszeitung Collection, and Sparkasse Collection.

Erik Swars studied under Jochen Plogsties in Burg Giebichenstein Kunsthochschule Halle and graduated in 2016. He also studied from O JUN in Tokyo National University of the Arts from 2013 to 2014. He first worked with geometric landscapes with full of vivid colors filling the screen, reminiscent of surrealism and metaphysical paintings, such as the New Leipzig School or Giorgio de Chirico. Under the continuous process of work with his master Jochen Plogsties, his recent pieces have become minimalistic, and also alike the Suiboku-ga style. His work could be described as a “Painting capturing the moment”: the multiple-layered surface made with gesso and opaque watercolor gouache supports the various expressions struck with dark blue oil, while he does not to dare to paint to his satisfaction to leave the instinctual strokes of the brush unchanged, the strength sharpen and soften under the dryness of the brush. Swars uses image sources that he finds on catalogs of old master paintings, or images on the Internet. He avoids the distinct frontal nature, but instead draws out a spread image that leads the viewpoint in various directions.

His works has been exhibited in a group show at Galerie Kleindienst Leipzig in 2017, a solo show at Spinnerei Archiv massiv Leipzig in 2016, and at JIKKA Gallery in 2013. KEN NAKAHASHI exhibited Swars works in a one-man show format at Art Fair Tokyo 2017, and held three solo exhibitions during 2014-2017.

Spinnerei, where Plogsties and Swars are based in was once the largest cotton factory in Europe, which came to be one of Europe’s leading contemporary art centre today. There are over 100 artists, and 13 galleries and exhibition spaces. As the cotton factory closed with the unification of East and West Germany, young artists moved in the large space to make their studio.

Spinnerei is located in the western part of Leipzig city called Plagwitz, the second largest city in former East Germany, also famous for being the city of musicians and composers such as Bach and Mendelssohn.

A “Leipzig School” of painters emerged in the city’s art scene of the 1960s, historically being surrounded and influenced by numerous art movements, from Bauhaus the revolution of 21 century architecture, design and craft work, German expressionist Brücke by Kirchner and Emil Nolde, German Romanticism, the Dresden artist group represented by Casper David Friedrich, and the contemporary art movement in Berlin.

Leipzig school had become widely popular as speaking the suffering of the people in the former East Germany. Following the tradition of the Leipzig school, the "New Leipzig school" is now the big brand with renowned artist Neo Rauch.

Jochen Plogsties, Rauch’s masters student, and Erik Swars of the younger generation, enthusiastically bring forward themselves to the exploration of the inner principles of painting, and present the record of this research thought their works.

【About the exhibition title “TSUKI 月”】

The moon has a gentle and great impact upon us and nature.

The theorem and rule of beauty that exists in nature like the Fibonacci number is an invulnerable dynamic, just as the contrast in the brightness and darkness of the moon is.

The impact of each moment is overflowing in the works of Plogsties and Swars.

This show will exhibit these two notable artists, who represent the next generation of Leipzig.