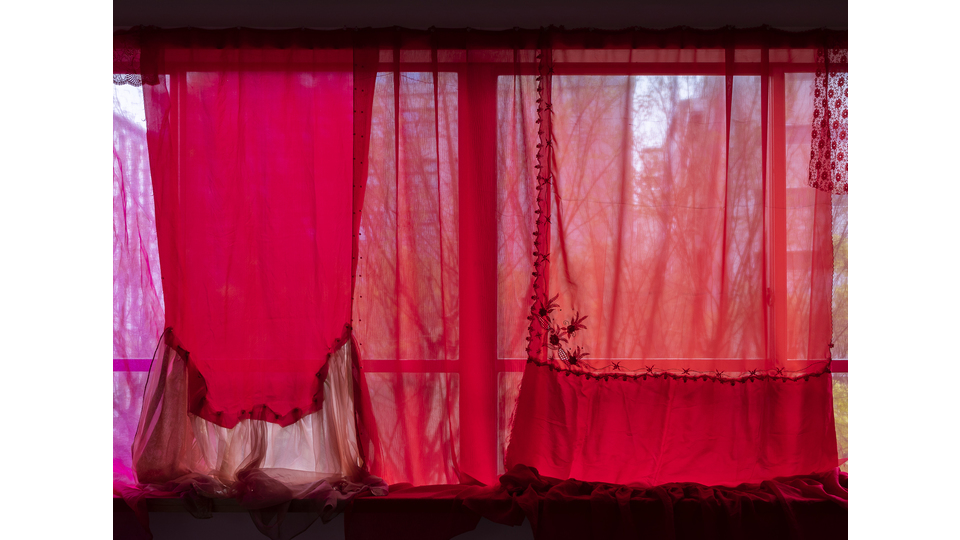 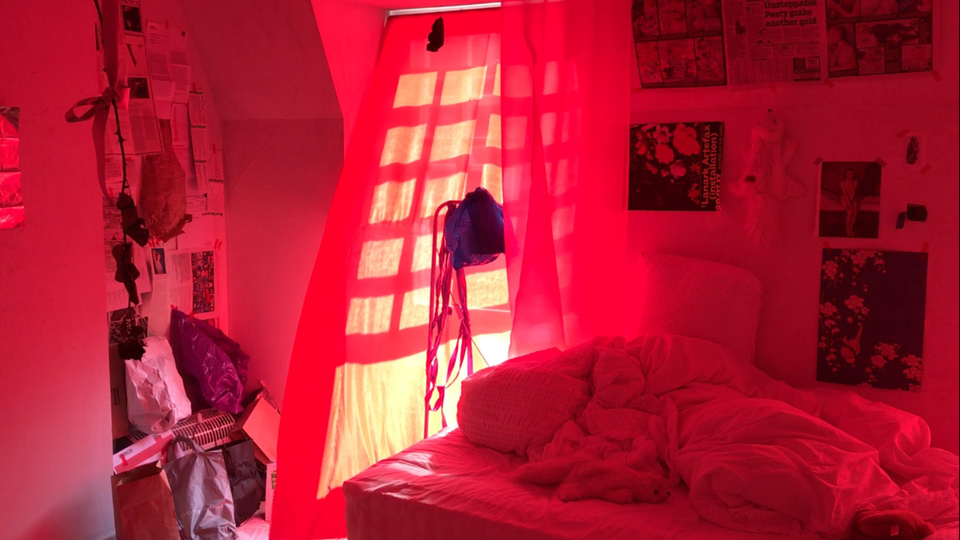 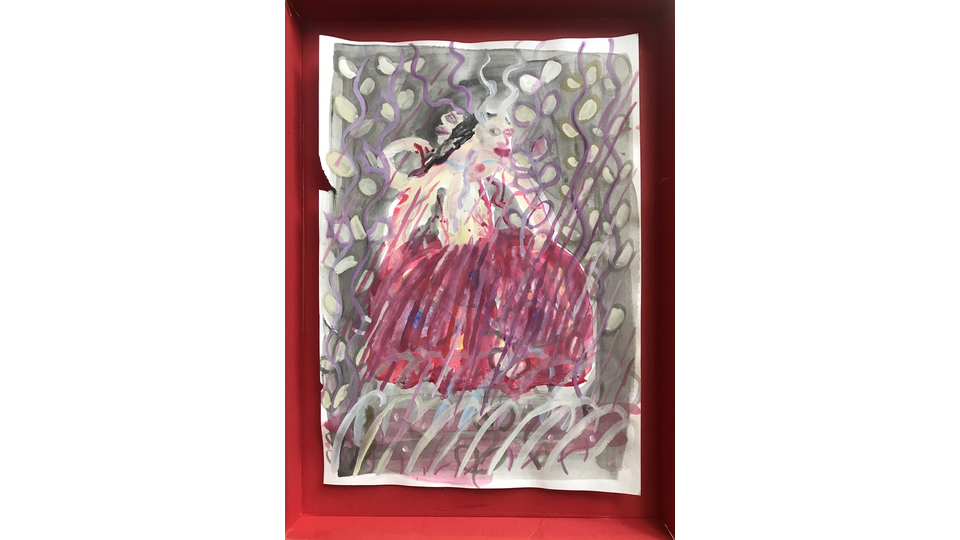 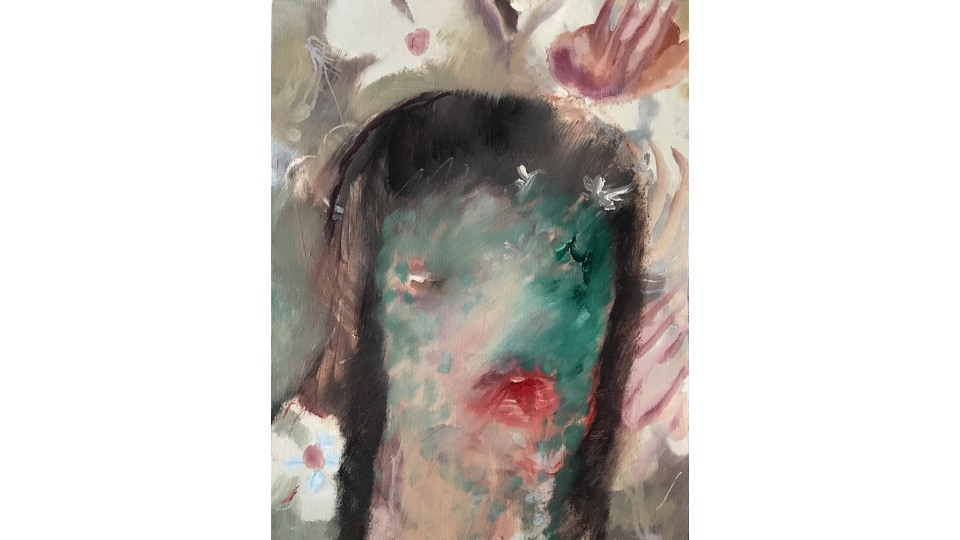 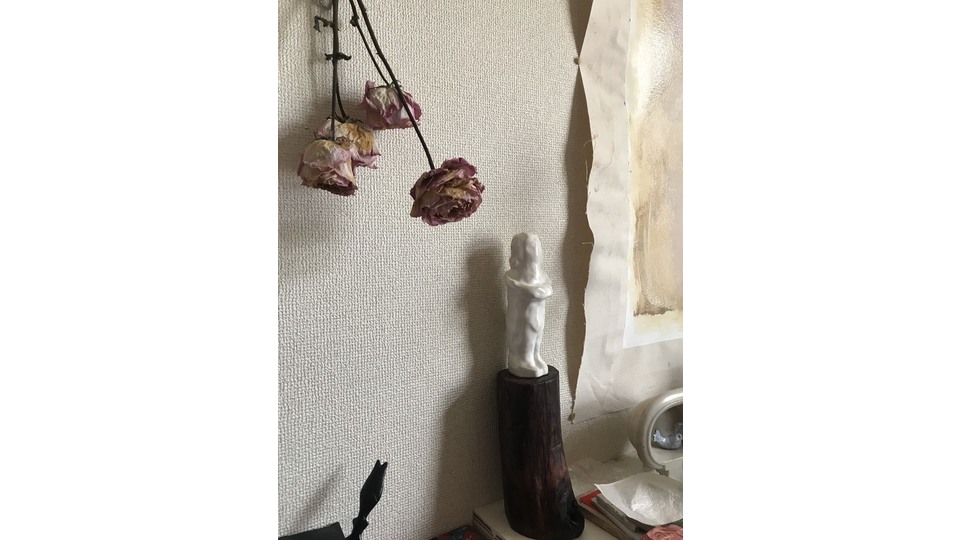 KEN NAKAHASHI is pleased to present Oasis, a solo exhibition by Mariko Matsushita, to be held from May 3 (Fri) until June 1 (Sat), 2019.

Pieces of thin red fabric cover the gallery’s window, creating a somewhat mysterious atmosphere and warming the room with sunlight. Titled Red Room, Matsushita’s collection of red laces - taken from womens’ and childrens’ clothes including her own shirt - are stitched together. Standing in the room are white sculptures in vague forms, as if they outline the wind and light, the temperature and gravity, of the atmosphere. Time flows slowly here, letting one feel the chain of life, restoration, and the miracle of their own body.

Matsushita thinks of this work like the girl in the red coat in the movie, Schindler’s List (1993), in which it appears in one place, lingers there for a while, and then exits. Amidst the monochrome film, a girl in a red coat appears on screen as a symbol of ephemeral life. As such, the red cloths expand as Matsushita collects more, and the Red Room will repeatedly emerge somewhere in the world, only to appear and disappear again.

Red Room was also created before, during a residence program in London 2017. Although the vast amount of videos of the Red Room itself remains unedited, Matsushita was surprised that there are many foxes dwelling in the city of London, and she chased their odor and cries, to make a short film work—Little Fox in London. This is a several month’s story about life in the red room, the making of child-like shapes, to the day they disappear.

Red Room is a work that gradually grows, which will reappear in numerous sites as one of Matsushita's important works. Her new ceramic works and paintings will be exhibited with the Red Room on this occasion.

Mariko Matsushita and her works

Mariko Matsushita was born in 1980, Osaka. B.F.A in oil painting from Kyoto City University of the Arts in 2004. In 2016, Matsushita received Grand Prize for the "2nd CAFAA" Award, organized by the Contemporary Art Foundation and had a residence program at the Delfina Foundation in London in 2017.

In recent years, through oversea travels and everyday life in Tokyo, she has expanded activities not only to expressions in paintings, but through various media such as performance, images, photographs, poetry, and sculptures.

Going through several environmental changes, Matsushita holds interest in the dialogue with nature / source of oneself, the act of childbirth, regional deities and views of life and death. For Matsushita, who has painted on the subject of sexual love and the pains of life, feminism is also an unavoidable theme which she does study. Nonetheless, Matsushita continues to produce works as a projection of personal mind.

Mariko Matsushita writes for the exhibition

I wonder when this letter will be read.

This exhibition’s a bit special. I hold in my heart, a certain scene that words cannot portray. Born in this world and gradually coming clear, how many times did we hear the winds blow? How much has the sun's heat warmed your back? When you held the stone in your coat’s pocket, did it give you the courage about your destination?

I believe that I will continue to create Red Room, again and again. In various cities in different countries. On a narrow street, in an old house, in an abandoned hut.

It is a pure red window that the sun shines through. A small window, like a drip of a child’s blood, a pain at the bottom of a memory, and the quake of your heart when you are in love. It appears and disappears, reappears and disappears again, somewhere in the world. As if it were a flicker of light, like our own human lives.

And every time I leave this room, I feel as if I was just born. I feel astonished, amazed, and sad, as I if I’d known for the first time. Beauty could be frightening. The world is made of blue and green. The earth is brick-colored, and we are walking on the bottom of the atmosphere.