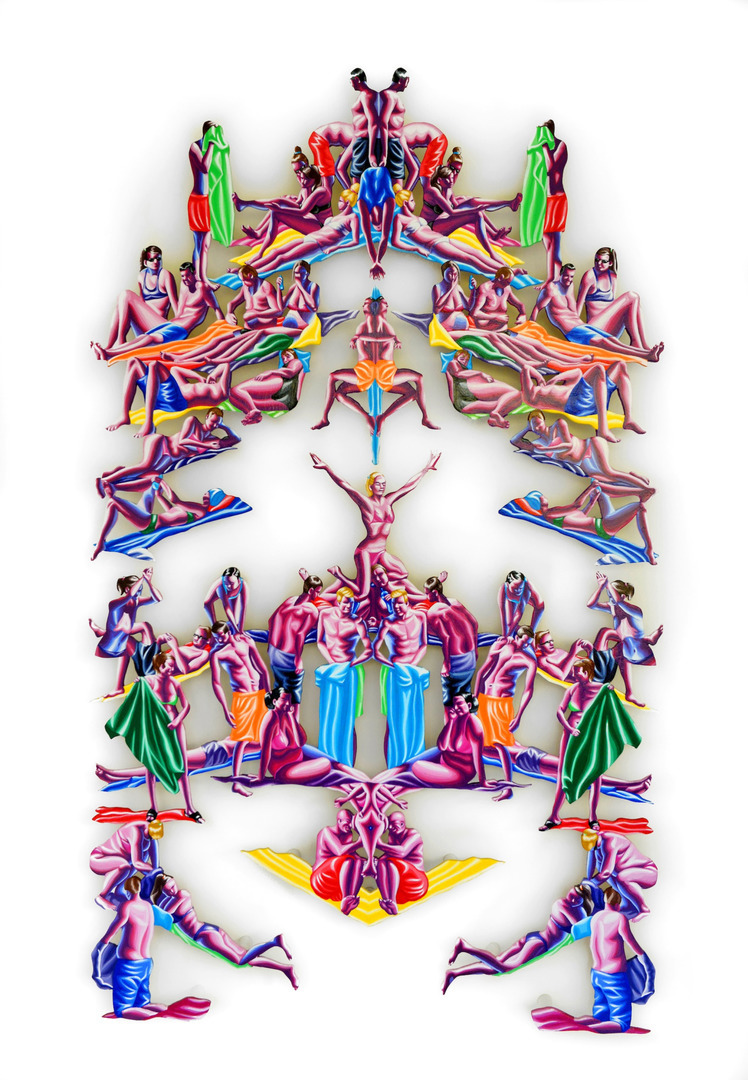 matchbaco is very pleased to announce “Halcyon”, an exhibition of works by Sabrina Horack, to be held from 14th November to 20th December 2014.

Born 1983 in Austria, Sabrina studied painting at the Academy of Fine Arts in Vienna.

After graduating in 2007, she was active as an artist in Vienna and relocated to Japan in 2013. She is currently specializing in oil painting at the Tokyo University of the Arts.

Her work examines the man-made and artificial ‘paradise’ in our urbanized societies. She wishes to shed light on the relationship between this manufactured ‘paradise’ and conglomerations of human populations.

She uses both painting and sculpture as a medium to explore her ideas.

Taken from Greek mythology, the title of this exhibition is a reference to ‘Halcyon Days’. Those days and nights of winter, free from the ravages of storm.

This exhibition will comprise mainly of the artist’s more recent works, in which she is honing in on mandala-like psychedelic symmetries.

The legs and arms of seaside and resort holiday goers are reconfigured in symmetrical patterns using a detached, yet highly detail oriented eye.

These compositions hold a deeper meaning in which the artist conveys the transcendence of human presence through the sheer detail and scale of the work, in a visual amplification of all of our yearnings and prayers for peace in our lives. Paradise indeed.

The artist first photographs human subjects and creates shapes through intertwining and repeating of specific parts of the body. The detailed form which has been created are then carved out of sheets of wood. Finally, the pieces are given sheen, and the contrast of light and dark are exaggerated to stunning effect.

The presence of the work is undeniable, and like real humans, these pieces cast a shadow on the wall behind them. Suspended in time and place, the viewer is compelled to move around and view the pieces from many different viewpoints to find new discoveries at each angle.

This installation comprises of 5 pieces, some as big as 2 meters in length.

We believe that visual spell cast by Sabrina Horack will seamlessly transport you to a space where we can hear the reverberations and echoes of the wishes of modern humankind, our vulnerabilities and our transcendental force.

Sabrina Horak about her works

I am interested in the concept of Utopia, not in the meaning of an ideal society, but rather that of a paradise, which, in my opinion, can exist for a short time, and is more state of mind, a memory, or even just a short moment, rather than a certain location. Having grown up in Austria with an austrian father and japanese mother, I always had an Utopia- like image of japan. I visited Japan several times during my childhood without speaking the language back then, and thus, felt very much like a tourist in some sparkling wonderland. This image of Utopia has nothing to do with real Japan, but is, as a dreamlike memory, the source of my inspiration.

An image like this towards Japan might be rare. Maybe someone, who did not grow up in between two cultures wouldn’t understand it. But I think that everybody has a longing for a perfect, Paradise-like Place.

I want to analyze my relation to Japan, based on the experiences and impressions I have, and express it in a way that is easier understandable for the viewer. The huge gap of the two cultures I grew up in between generated a perpetual tension throughout my whole life. I always used this tension as energy to create my works.

Living and studying in Japan now didn’t make this tension disappear. In Austria, I am always perceived as an oriental or asian, and in Japan I’m a foreigner as well. No matter where I go, I never fit in. So as long I use this as a stimulus to create my artwork, I will never run out of energy.

With my former “Crowd”-Series and my current series of symmetric paintings I want to create an equal tension. On one hand, I want to express this tension, and on the other, I want to express feelings of utter happiness, the imaginary paradise. Through this gap, even more tension is created.

Austrian and Japanese culture, society, language, senses, and so on, are very different. I want to create artworks that were obviously by someone who grew up between those two cultures.

The shape of the series of symmetric works I am working on at the moment looks a little bit like european crests from times long passed by. That wasn’t something I did on purpose, but something I recognized after finishing the works. The shapes I had around me growing up in Austria subconsciously influenced me and have now emerged in these works. While having this aesthetic sense as a base, I want to adopt japanese aesthetics and influences and combine them in my works.

My work “So close to paradise” is my first symmetric work, where the height is longer than the width. That makes it resembling to churches or temple buildings. The compositions of my symmetric paintings are strongly related to architecture.

I want to learn more about architecture, because I think that the composition of my paintings will benefit from this.

Why did I chose summer as a setting for my works?

Winter in Vienna is very different from Winter in Tokyo. It’s very cloudy and cold. For me personally, it’s almost unbearable; that’s why light-flooded summers are my personal ideal. Summer exists only for a limited time span, since we have no direct control over weather and temperature.

To imitate this state of summerly happyness if very difficult.

From my point of view, man-made public swimming pools and resort centers are an allegory to this state of summer.

I was very interested in a resort center named ocean dome in Miyazaki, Japan, that was famous for beeing the only artificial real indoor beach in the world for a while (and was built in walking distance from a real beach). I was planning to take pictures there for my next artworks, before i found out that it unfortunately closed down in 2007. What i am interested in is not natural beaches, but man-made swimming pools and resort centers, since I am interested in the artificial image of Paradise or Utopia. In the same way I retreat into my memories of Japan to forget about daily life, people retreat to swimming pools or resort centers to forget daily life, and have a good time (also similar Parallellworlds such as Fun parks like Disneyland, or the popular Venus Fort, Odaiba, with its kitschy decoration, and many others). This is also, in my opinion, a short term Paradise.

Why do I express an abstract feeling with figurative paintings of people?

More than, for example, paintings of landscapes or animals, what impresses the viewer the most and gets the most attention is the flesh of the human body. For me, it’s not important, whom I’m painting. The shapes of the humans and their body parts are like toys to me, that I can arrange in any way that pleases me.

Since 2007, I am using wood for my three dimensional paintings. I started to dislike the quadrangular shape and the hard edges of canvases, so I decided to simply remove the backgrounds and only paint what I wanted to paint- people.

I am browsing through hundreds of pictures I took at various public swimming pools, to find people that fit best into the work I am planning to make. I draw directly with pencils on wooden plates of the thickness of 8 mm that were primed with Gesso beforehand, and make the composition of the actual work. In this process, the composition grows like a plant.

Then I cut the shape with a jigsaw, and grind the edges with sandpaper, to make them smooth. Then I paint the actual painting with Acrylic paint, and in the end, apply a shining varnish to achieve a glossy effect.

To create a distance between the level of the wooden painting and the wall, I apply round, wooden spacers with the diameter of about 1 cm(0,39 inch), and the length of 1 cm- 9 cm(3,5 in), depending on the size of the painting(the smaller the painting, the shorter the distance to the wall).

Wood I prefer due to the warmth it exudes. Cutting it with my own hands and being involved in every step of the production is also essential for me.

Sabrina Horak, who grew up in between the cultures of Japan and Austria, creates mandala-like partially three dimensional compositions, through which she explores the relationship between the man-made “utopia” that arise from urban life, and the people who live within these artificial constructs.

Separated human limbs are reconstructed into an unfamiliar form, in which Horak carefully cuts out from wood. In addition, She applies luminescent colours that make the overall form look as if it is a floating organ.

Born 1983 in Austria. Lives and works in Tokyo.